View our collection of Temples / Shrines in our gallery

Yonghe Temple is most popularly known as the Yonghe Lamasery which translates, Palace of Peace and Harmony in English. It is also known as Lama Temple. For a brief introduction, the Yonghe temple is a temple and monastery regulated under the Gelug School of Tibetan Buddhism. This temple is located in Dongcheng District, Beijing, China. The buildings in the Temple complex are built on Han Chinese and Tibetan styles.

The construction of the Yonghe Temple was started in the late 17th century during the Qing dynasty. Previously, the site was the official residence for the court, eunuchs of the previous dynasty. As the temple was completed, it was then converted into the residence of Yinzhen, Prince Yong, the fourth son of the Kangxi Emperor. Later when the prince ascended the throne as an Emperor, he converted half of the building into a lamasery. It was made a monastery for the monks who follows Tibetan Buddhism. The other half of the building was used as an imperial palace.

In 1735 CE, the Emperor died and the Qianlong Emperor succeeded him. He gave the temple imperial status signified by having its turquoise tiles replaced with yellow tiles which were reserved for the emperor. And henceforth, the monastery became the residence for large numbers of Tibetan Buddhist Monks. They were mainly from Mongolia and Tibet. The Yonghe Lamasery became the national center of Lama administration.

Later the temple was declared a national monument in mid 20th century and was closed for following 32 years. It is believed that the temple survived the cultural revolution. It was opened only in 1981 CE for all the public.

Features of the Yonghe Temple 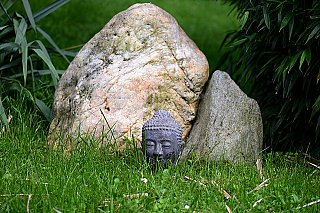 The Younghe Temple is arranged along a north-south central axis. The length of this temple is 480 meters. The main entrance gate is at the southern end. Along the axis, there are five main halls, separated by courtyards. These halls are- Gate hall of Harmony and Peace, the Hall of Harmony and peace, the Hall of Everlasting protection, the Hall of the Wheel of the Law, and the Pavillion of Ten Thousand Happiness. In the local language, these halls are called- Yonghemendian, Yonghegong, Yongyoudian, Falundian, and Wanfuge.

The Gate Hall of Harmony and peace: this hall is located at the southernmost of the main halls. It originally served as the main entrance to the monastery. This hall houses Maitreya Buddha statues at the center of the hall along with the wall statues of the four Heavenly Kings.

The Hall of Harmony and Peace: this hall is the main hall of the temple since it houses three bronze Buddha statues of the Three Ages- the statue of the Gautama Buddha placed in the center, statue of the Kasyapa Matanga in the right while Statue of Maitreya Buddha in the left. The Buddha is depicted in seating posture with similar Buddha heads but different hand mudras. Along with these Buddha statues, the hall also houses statues of the 18 Arhats at the side of the hall. The hall is also equipped with the murals of Bodhisattva Avalokitesvara.

The Hall of Everlasting Protection: Originally, this hall was emperor Yongzheng's living quarters when he was a prince. After his death, his coffin was placed in this very hall but at present context statue of healing Buddha, Bhaisajya-guru has been placed.

The Hall of the Wheel of the Law: this hall houses a large statue of Je Tsongkhapa, founder of the Geluk school along with five hundred Arhat Hill. The arhats were carved in red sandalwood and also some of them are made up of five different metals. This hall has special significance because it functions as a place for reading scriptures and conducting religious ceremonies.

The Pavilion of Ten Thousand Happiness: this hall is also referred as the Hall of Boundless Happiness. As the Gate Hall of Harmony and Peace, this hall also houses statues of Maitreya Buddha, carved from a single piece of White Sandalwood. The height of this statues is 18 m. The statue was a gift from the seventh Dalai Lama to the Qianlong Emperor. It is recorded that the total time taken to transport this statue from Tibet to Beijing was three years.