The main building of this temple complex were reconstructed during the Ming dynasty and Qing dynasty. The temple complex consists of numerous halls which is divided by courtyards and manicured gardens which covers the area of 13 hectares. The halls houses significant statues which include Sakyamuni Buddha, Maitreya Buddha, Jade Buddha, Bodhisattvas, Amitabha Buddha, arhats, and stone statues of the two white horses. These buildings were renovated in various periods and most recent one was in 2008 during which the Sanchi Stupa and the Sarnath Buddha statues were established. 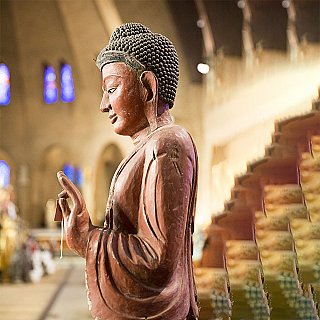 There are several legends associated with white horse temple one of them relating to the foundation and naming of the temple are:

Once Emperor Ming saw a dream about a Buddha. He wishes to establish and spread Buddhism in China. Hence, he sets emissaries to search for Buddhist scriptures. They encountered two Indian Buddhist monks, Kasyapa Matanga and Dharmaratna, request them to come to china with the purpose to spread the teachings of Buddha. The Indian Monks joins them and bring Buddhist scriptures, relics and Buddha statues on two white horse. When they reached the China, Ming Emperor was impressed and he ordered to build a temple for the monks. The temple was named the White Horse Temple as an appreciation of the white horse that had carried the monks. The monks lived in the temple, translated many Buddhist scriptures, and finally became the central area to spread the Buddhism in China.

The book, "the land of Snow" gives another version regarding the establishment of the Temple. Since there are many contradictory versions of the story, most modern scholars accept these stories as a Buddhist fable and not a valid historical event. 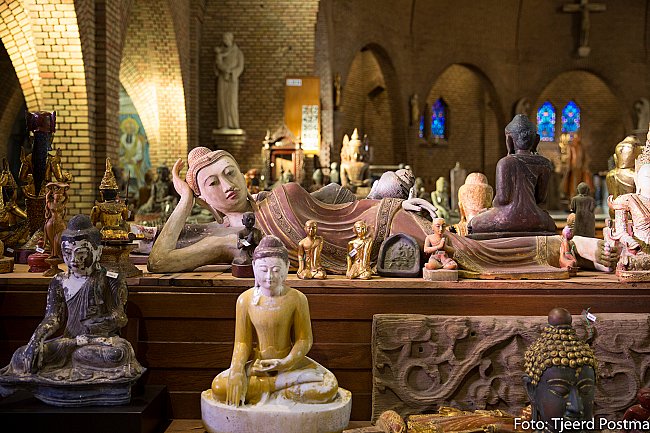 The temple are aligned along a central axis. It starts from the entrance gate followed by several halls and then leads to courtyards. The temple faces south and its compound covers an area of 13 hectares. At the front of the temple, the stone horses are placed which are constructed in the Ming architectural style. This horses represents the white horses which carried the scriptures and the Indian monks to China. There are another two horses at the entrance gate which are made of green stone dated to the Song dynasty.

The halls that are built in the temple complex apart from main hall are named as Hall of Greetings, Hall of Six Founders, Hall of Jade Buddha, Hall of Heavenly Kings, Hall of Mahavira and Hall of Changing Ge. In addition to these halls, there is cool and clear Terrace which is known as the Qingliang Terrace behind the main hall. This place was the original place where the original sutras were translated. In every courtyard, large burners are kept with the purpose for worshipers to light incense sticks, creating a pungent order. All the halls houses Buddha statues in which the altars are filled with fruit and other offerings made by the devotees.

The Hall of Greetings: it is a relatively new buidling that was built during the 9th year of Guangho period as replacement to the original hall which was burned down at the beginning of the Tonghzi period. This hall houses three statues- Amitabh Buddha, Avalokiteswara, Mahashatahaprapta.

The Hall of Six Founders: this hall houses the statues of founders of the temple and they are Bodidharma, Huike, Sengcan, Daoxn, Hongren, and Huineng.

The Hall of Jade Buddha: this hall houses statue of Sakyamuni Buddha of 1.6 meters tall. This statue was donated in 1988 and is made up of Jade.

The Hall of Heavenly Kings: this hall houses statue of Maitreya Buddha. Often the buddha head is depicted bald and in laughing expression. This statue is accompanied by four heavenly kings. In addition to these statues, statue of Skanda is also erected in this hall.

The Hall of Mahavira: This hall houses statues of three principal Buddhas. The central one is Sakyamuni Buddha and on the left is of Bhavisyajya guru and on the right side is of Amitabha Buddha.

The Hall of Changing Ge: this hall is a repository of ancient scriptures. This hall contains more than ten types of Buddhist texts along with antique Buddha statue at the center of the repository.

The Main Hall: This hall also houses three statues. The central one is of Sakyamuni Buddha which is accompained by Manjushri and Samantabhadra.

View our collection of Buddha statues and arts