Mount Wutai is a sacred Buddhist site at Qingshui in Shanxi Province, China. The other names for this mountain are Wutaishan and Mount Qingliang. Also, the central area is surrounded by a cluster of flat-topped peaks corresponding to the cardinal directions. Among them, the north peak named Beitai Ding or Yedou Feng is the highest peak which measures 2,061 meters. It is also recorded that this peak is the highest peak in northern China.

It is also noted that Mount Wutai is the home to over 53 sacred monasteries and temples. Hence, it was listed as a UNESCO World Heritage Site in 2009 CE. 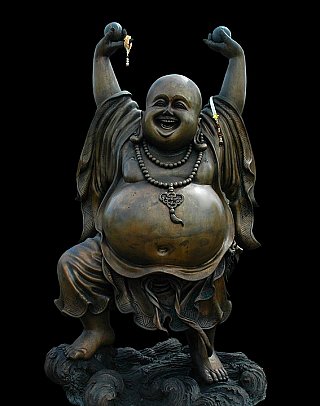 As per Chinese Buddhism, Mount Wutai is considered as one of the four sacred mountains. Other being Mount Jiuhua, Mount Emei, and Mount Putuo. Each of these mountains is viewed as the Bodhimanda, one of the four great Bodhisattvas. For Mount Wutai, Bodhisattva Manjusri is associated with since the ancient times.

Mount Wutai was identified on the basis of the passage in the Avatamsaka Sutra. In the content of Avatamsaka Sutra, Bodhisattva Manjusri is said to reside on a clear cold mountain in the northeast. Hence, the mountain is also popularly known as Clear Cool Mountain. There is also a general belief that the Bodhisattva frequently appear on the mountain, either by taking the form of ordinary pilgrims, monks or unusual five-colored clouds.

Along with Chinese Buddhism, Mount Wutai also has an important relationship with Tibetan Buddhism.

In Mount Wutai, there are several Buddhist temples and monasteries that played an important role in spreading the teaching of Buddha. One of them is Nanshan Temple which is built in the Yuan Dynasty. It is believed that the temple is the largest among other temples situated there. The whole temple comprises of seven terraces and is divided into three parts. The lower three terraces are named Jile Temple, the middle ones are Shande Hall while the upper terraces are Youguo Temple.

Xiantong Temple, another major temple in Mount Wutai, covers a total area of about eighty thousand square meters. The temple is constructed on the basis of the basic architectural pattern of the Ming and Qing dynasties. The temple consists of seven main halls which are arranged in the central axis. These halls are named Guanyin Hall, Great Manjusri Hall, Great Buddha Hall, Amitabha Hall, Qianbo Hall, Copper Hall and Buddhist Texts Library. The Qianbo Hall houses statues of Manjushri with thousand alms bowls. The walls of the Copper hall has carved ten thousand small Buddha statues with localized Buddha heads in golden color. The columns, architraves and partition board of this hall is beautifully carved with birds, flower, and animals.