Mount Putuo is a sacred Buddhist site at the island southeast of Shanghai, in Zhoushan prefecture of Zhejiang province, China. As per Chinese Buddhism, Mount Putuo is also one of the four sacred mountains. The other mountains are Mount Wutai, Mount Jiuhua, and Mount Emei. It is also believed that every mountain has the Bodhimandas. Hence, for Mount Putuo, it is Bodhisattva Avalokitevara. For Mount Wutai, its Manjushri; for Mount Jiuhua, its Ksitigarbha; and for the last one, Mount Emei, its Bodhisattva Samantabhadra.

Mount Putuo also houses numerous famous temples. These temples are visited by millions of pilgrimages on the 19th of Feb, June, and September of the Chinese calendar to celebrate the birth of Guanyin. 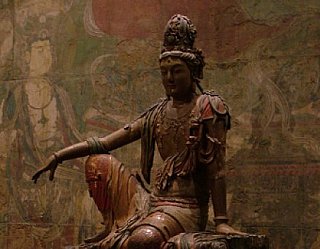 Only after the Tang Dynasty, Mount Putuo became the center for worshipping Bodhisattva Avalokitesvara. Earlier there were three main temples- the Puji si Temple, the Fayu si Temple, and the Huihi si Temple. These temples were founded in the 10th century, 16th century, and 18th century respectively. But today, the pilgrimage site has been housed for more than 30 major temples along with monasteries. There is also the Institute of Buddhism which is one of the largest Buddhist academic institutes in China.

Some of the major temples housed in the Mount Putuo are as follows:

Puji si Temple was built in the early 10th century. Initially, it was named as Bu ken qu guanyin yuan. The temple was renamed during the period of Emperor Shenzong of Song Dynasty in the early 11th century. But the original name of the temple was not lost as nearby hills were called with that name. In the present time, the hill holds the 20-meter tall statue of Bodhisattva Guanyin. It was recorded that in the early 13th century, Emperor Ningzong donated tens of thousands of mins to the temple and presented a sign reading General Funds Hall.

The temple has the record of multiple times of renovation and repair. The major renovation and repairs were during the reign of Emperor Chengzong of the Yuan Dynasty in 1298. This renovation was done by Li Ying. Likewise, the temple was also provided with the donations by lots of donors especially royal ones. The temple also experiences the shift in location during the reign of Duke Tang of Ming Dynasty. During this period, the temple was renamed as Qita temple. Since Duke ordered to burn the temples. Again in 1553, the Ming government also destroyed the temples located at the Mount Putuo. These temples were only renovated in 1572 by the monk, Zhen Song.

Fayu Temple is also popularly known as Stone Temple which is the second largest temple in Mount Putuo. Like Puji si Temple, Fayu si Temple has also gone through lots of up and down. The initiation of the temple was possible only due to the visit of the monk, Macheng. Macheng while his visit built a small sanctuary named Ocean Tide in the mountain. Later his sanctuary was renamed with Ocean Tide Temple by the governor, Wu Anguo. This sanctuary was burnt down in the late 6th century which was renovated only in 1605 CE. During the renovation, the sanctuary was also expanded and then was named as National Defense Ocean Pacifying Temple.

The temple was again renovated and expanded during the period of Qing dynasty in 1687. Later in 1699, the Kangxi Emperor granted a tablet which mentioned, "Heavenly Flowers Dharma Rain". Therefore, the temple's name was changed to "Dharma Rain Temple" which is Fayu si Temple in the local language. The temple was not so popular until the Yongzheng Emperor ordered a large-scale renovation project.